a hay meadow in the Stort valley 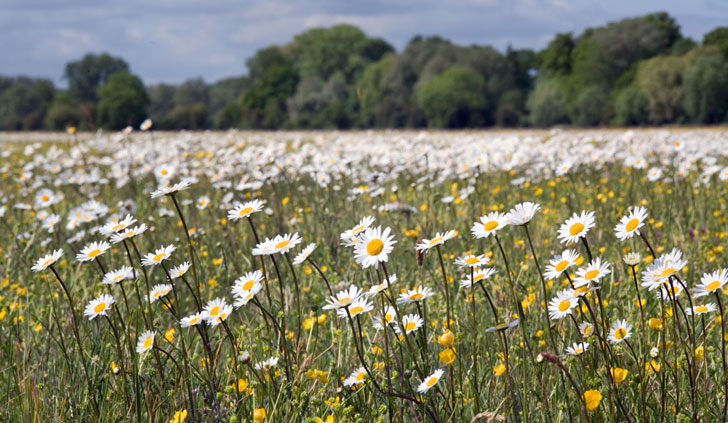 Oxeye daisies in May

It comes as quite a surprise, to see what happens to a field if you just let the grass grow in the spring - no grazing, no weed killers, or ploughing or mowing - then cut it for hay in the summer after the plants have seeded. And do that for many, many years. Species of wild flowers colonise the field - along with the grass - and put on quite a show. This is a hay meadow. They are a rare sight in the English countryside now. It's estimated that 98% of them have been lost to modern agriculture, but Hunsdon Mead survives.

This area, by the Stort river on the Essex-Hertfordshire border, would once have been forest. Something like the beech and oak woods of Epping Forest a couple of miles to the south. If the field was not cut for hay, then gradually the trees would re-establish themselves and the species of open grassland would be replaced by species of the woodland undergrowth. So Hunsdon Mead is not wilderness, it is not truly the 'natural' state of the English countryside, it is a man-made environment, but one that supports a lot of plants and animals that can't survive the regime of modern intensive farming. It's not that farmers don't make hay any more - hay bales are a common sight round here in late summer - but even the production of hay has become a carefully controlled process. As with other crops, weed-killers are used to remove everything else, to maximise the amount of hay produced and also to ensure that poisonous plants don't find their way into the food chain.

Hunsdon Mead comes to life in April, May and June, and then goes back to a grassy field like any other. Each flower species peaks for a couple of weeks, so it is not possible to see everything in one visit. There is also some variation from one year to the next. The shot at the top of the page was taken early June in 2011, when the meadow was pretty well carpeted. In other years ( my records only go back to 2010 ) the spread of daises was more patchy. The ubiquitous buttercups reliably produce a yellow carpet, before being gradually overpowered by other plants. I think they are most prominent in May. Cow parsley and hogweed grow thick on the margins of the meadow ( which are never cut ) and occasionally on the open ground. In fact the field and the margins are quite distinct environments. Presumably the open field favours plants that can survive cutting ( or grazing ). Plants like willowherb and comfrey find their place in the margins, where they grow tall and vigorously and form large clumps, and leave little space for smaller plants.

As the season comes to an end, the grasses throw up their seed heads in a variety of colours - green, brown and pink - and compete with everything else. The sun dries the meadow out and brings up the grass pollen on hot days, triggering my hay fever. A few weeks later the owners of the site, the Essex Wildlife Trust and the Herts and Middlesex Wildlife Trust, bring in a tractor and cut everything down. It's noisy and dusty and the meadow is best avoided at this time. Perhaps one day they could try a horse-drawn reaper instead ?

the Stort canal and a moored boat, looking west

On the south side of the meadow is the Stort canal, and Hunsdon Mill Lock ( the mill itself was demolished in 1902). There is only leisure traffic here now. The boat owners seem like friendly and contented people as they chug up and down the canal, but there is sometimes a bit of shouting and commotion as they negotiate the lock. On the other side of the meadow is the meandering Stort river, still with a considerable flow of water, although some must be diverted to supply the canal.

Overlooking the site is Briggens (right), a large Georgian-style country house built in 1720 and now run as a hotel and golf club. My picture of it, looking from the meadow over the river and up to the house, foreshortens the view. There is a bridge over the river at the west end of the meadow giving walkers access to the estate. I'm not sure how welcome you will be though. There are a couple of villages nearby which make pleasant enough places to stop for lunch. Roydon is a few minutes cycle ride west along the canal path. To go north, there is a path from Hunsdon Mill Lock, across the busy A414, to Eastwick. For the cyclists, quiet backroads and bridleways run from Eastwick to Gilston and beyond through rural Hertfordshire.

Hunsdon Mead is open to the public and access is free. A sign warns people to keep to the paths, to avoid treading on the flowers. There is no road access to Hunsdon Mead - which is just as well. But the canal towpath - now a cycle path - runs past it. The best way to visit is to get your mountain bike to the Lee and Stort Valley canal system - there are many points of access - and cycle there. I live in nearby Harlow and join the path at Parndon Mill.